Posted on 26th January 2015 by NomadWarMachine 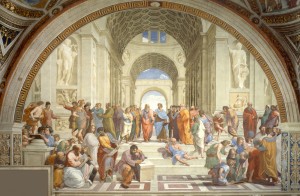 There’s a common assumption that there is a gender bias in STEM subjects in HE, but a recent study released in Science has discovered that this is not  actually the real story, and that actually philosophy is among the five subjects with the fewest women (the others are engineering, computer science, physics, and music composition.) while some STEM subjects have about 50% of PhDs being women.

This does not come as surprising news to me.  As a philosophy undergrad in the 90s it was noticeable that there were no female members of academic staff, and I am used to reading articles with titles like this: ‘Philosophy is for posh, white boys with trust funds’ – why are there so few women?  The Science researchers propose a reason:

We hypothesize that, across the academic spectrum, women are underrepresented in fields whose practitioners believe that raw, innate talent is the main requirement for success, because women are stereotyped as not possessing such talent.

Maybe it is because of the emphasis on analytical thought that so many of the UK Philosophy Departments have, maybe it could learn from (whisper!) the “Continentals”, or even (shudder!) women, or maybe it is something else, but I think that it is a problem.  Jenny Saul agrees, for example arguing that women in philosophy find themselves subjects of implicit bias and stereotype threat. (This might require an institutional login.)

However, if we look at the history of Philosophy then we find that pretty much all of the canonical texts are written by men.  And that means that even those of us who are female and teach still need to use men’s voices to do so for the most part.

So true, and so hard to do when all that is available is written by posh white boys.