Posted on 7th November 2015 by NomadWarMachine 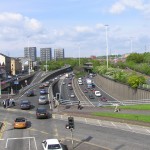 It started with Simon’s students Etienne and Loic who wrote a song about a road trip which Simon encouraged DigiWriMo peeps to record their own version. Several did, and you can find the lyrics and links in this Google Doc as well as in Simon’s blog post. This afternoon, with the house to myself, I sat down to think about what to do.

First I used Audacity to record myself reading the lyrics aloud (I could have just used my phone, or the free sound recorder on my Windows PC, of course). Then I exported the recording and imported it into Soundtrap.  Soundtrap’s an online studio that allows you to upload audio and remix it. It also has a fairly extensive selection of sound loops which you can add to make your stuff sound really professional. (Note that I am not saying that my stuff sounds professional though!).  I added some synth and piano sounds, tweeked the volume et voila – in a relatively short time I’d produced a new version. Soundtrap allows asynchronous collaboration, so if any of us wanted we could produce a version of this song together. Some of us did that during #Rhizo15 (see the first two tracks on this playlist).

Here’s my version of the roadtrip song.

Image of The M8 motorway running through Glasgow, Scotland taken by Finlay McWalter on the 7th of May 2004. (CC BY-SA 3.0)