Posted on 20th February 2016 by NomadWarMachine

I know that some folk dislike the term scaffolding. For example, in a recent post Sean Michael Morris explains why he didn’t attempt to scaffold #MoocMooc, and that started a healthy debate about the metaphor. 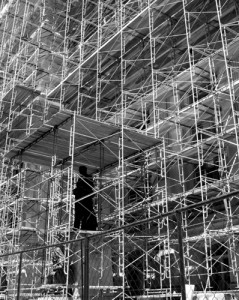 Some love the concept, some hate it, some (like Giulia) think it depends how it’s used. For what it’s worth, that’s my opinion. And when thinking about adult learners in things like #MoocMooc, it’s probably fair enough to expect that we’ll get along without the help of scaffolds. But not all learners are in that position.

I can see why some folk dislike the metaphor. If you think literally about metal structures then it seems rigid and forced. But if, like me, you just think of it as a handy label for something that is often a good support for learners, then you might be able to ignore the visual image and focus on other times that this occurs. 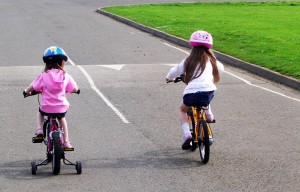 So what if we think about scaffolding as being similar to stabilisers? As dissolvable stitches? As holding a child’s hand as they take their first steps? When I teach using the Jigsaw Classroom I begin with fairly structured lessons, and gradually provide less each week as students grow in ability and confidence. That’s what I mean by scaffolding – not pinning learners down to what I want them to think, but keeping a watchful eye over them as they find their feet – something like I was saying here. 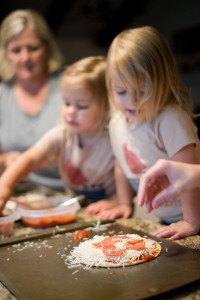 For me the best analogy, though, is with parenting (and aunting – I never had kids myself, but I have a lot of nieces and nephews). Anybody who has had children “helping” them bake a cake will appreciate how much scaffolding occurs in order to let the children believe they did it all themselves – and how, gradually, children turn into competent and confident cooks.

flickr photo by donnierayjones  shared under a Creative Commons (BY) license