Who owns a hashtag

Posted on 17th June 2017 by NomadWarMachine 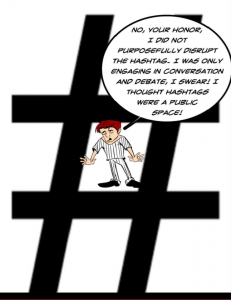 What are the status of hashtags? Are they things that can be owned by individuals or groups of individuals? Once I have laid claim to one, can I request, or even demand, that other users follow whichever rules I have decided apply? Can a group  (explicitly or implicitly) come up with a set of rules or conventions that apply to tweets containing a particular hashtag? I was prompted to think about these questions during a Twitter conversation that begun after a discussion about whether remixing a stranger’s words, or images, was something we’d do. A tweet by Wendy left me thinking of tweets to a hashtag as being a signal that a person might be open to a conversation. I wonder what others think.

7 Responses to Who owns a hashtag