Posted on 4th May 2015 by NomadWarMachine 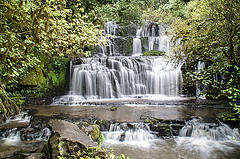 flickr photo by Kiwi Tom http://flickr.com/photos/tom_hall_nz/14917023204 shared under a Creative Commons (BY) license

I’ve seen a few comments over the last couple of weeks about people not being able to keep up with rhizo15, or read everything, and I think that this might be causing some folk to worry that they are not doing enough, or that they are missing out on something important. I know it’s easy to say that it’s fine not to do everything – and probably impossible to do it all. We don’t usually expect our “regular” students to read absolutely every suggested reading do we, so why do we expect that we should digest every offering in #rhizo15?

A lecturer once explained to us that a reading list was like a menu – we should try to make  a balanced selection, but not attempt to cram everything in. More recently, Stephen Downes makes a similar point. He suggests that unlike a traditional course, which compares to a book in having  a linear content, so that later parts depend on those earlier, things like rhizo15 are more like magazines and newspapers – you dip in and engage with the bits that catch your attention and ignore the rest. (Or they are more like a map, to make a D&G analogy.)

Dave also has suggestions about how to approach a thing like rhizo15, and which I keep written on my whiteboard as a reminder:

Is is time to cluster?

18 Responses to Time to cluster