The rhizome is NOT a metaphor

Posted on 13th March 2016 by NomadWarMachine 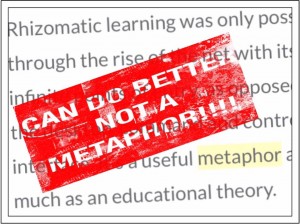 Deleuze & Guattari’s concept of the rhizome in A Thousand Plateaus is not a metaphor. Let me repeat that. IT IS  NOT A METAPHOR. NOT. A. METAPHOR.

Despite acknowledging this in their recent paper The rhizome: A problematic metaphor for teaching and learning in a MOOC, the authors nevertheless use the word a staggering 72 times in 14 pages – including in the title. If you’d like to see comments by me and others on that article, you can do so as follows:

(Instructions adapted from Simon’s post to Facebook.) This might sound footly to do, but Hypothes.is is a really cool tool for annotating web pages and once set up it is really easy to use.

Anyway, I digress. So what is the rhizome – well, it’s a CONCEPT. To call it a metaphor, as this site puts it: “is to reduce to a mental operation with no real consequences in the world”. Quite. And, again from the same site:

Guattari is Not Making Metaphors. He and his friend Deleuze state and restate this. It is a machine, a connecter a way of organizing and disorganizing and reorder the assemblages. [sic] 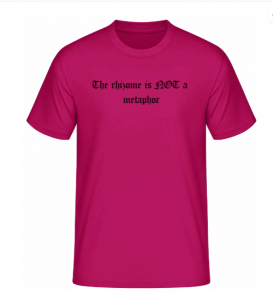 It’s also really misleading to think of the rhizome as a botanical concept. Sure, irises and ginger are rhizomes, but understanding D&G’s concept (not metaphor!) like this misses out the heterogenerity that is one of the six principles of the rhizome (see p82 here for a visual of all six). 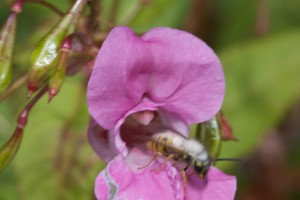 Edit: it’s been pointed out to me that this example might be misleading as it is a symbiotic relationship. I’ll need to find an even more heterogenous one.

Those of you who enjoy reading D&G might also be interested in considering the rhizome as metamorphosis. This from D&G (1986) Kafka: Toward a Minor Literature

“Could do Better” Image by @Sensor

4 Responses to The rhizome is NOT a metaphor