Posted on 22nd June 2016 by NomadWarMachine 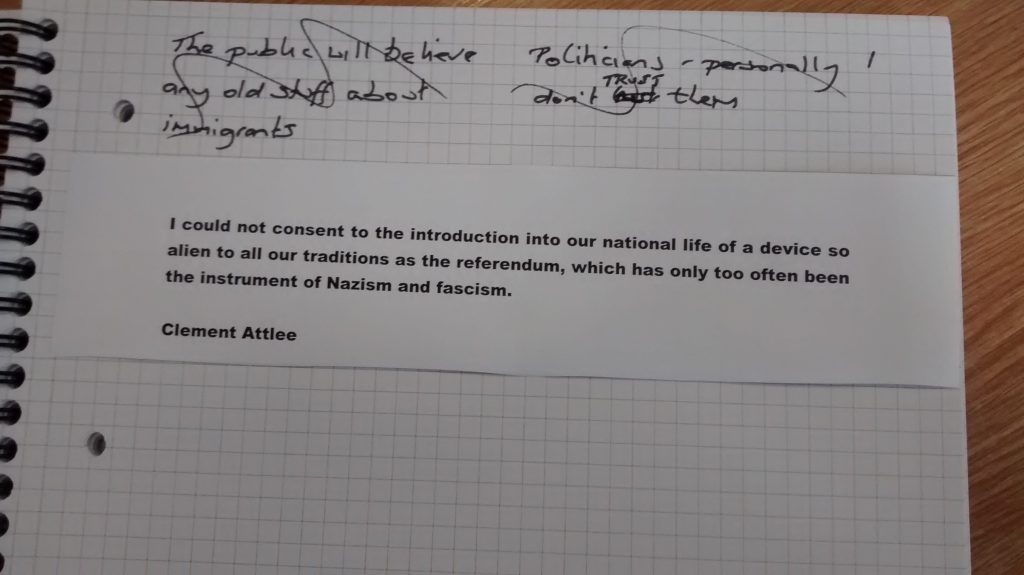 It didn’t feel like this last time. Indyref (the vote for Scottish independence) was exhilarating – young folk were learning about politics and there was an energy that I have never seen or felt before. Sure, we knew we might not win, but – and this is important – much as we hated Westminster rule, nobody was predicting that a vote to remain was going to be a total disaster.

But this time is different. The Leave campaign has disgusted me with the depths it has stooped to in order to gain voters. They’ve made it all about immigration, and whipped up a fear and hatred of some of our fellow humans for others. Not amongst my friends – at least, I don’t think so – but from enough potential voters in England for it to be a very real possibility that the Leave vote wins.

And that has me worried – about the cost of living in a post-leave UK, about my future rights, about the future of my research and even my job. Selfish worries, but natural ones. And I worry about the poor, and the disabled, and all of the other disenfranchised and minority residents of the UK.

But I’m also worried for all of us. Because the Leave campaign have whipped up some nasty xenophobic, racist, bigoted feelings in folk and now they are out of the box it’s not going to be easy to repress them. I have seen families falling out because they are on different sides of this … I can’t call it a debate, it is not that respectable – let’s call it an “issue”.

But there’s more. I have Leave voters telling me that they are going to vote with their guts, their hearts, that they are taking their country back.

I keep trying to explain to them that it was never theirs in the first place. The Tories are playing games with all of us. Whoever wins, it will be little rich boys in charge. But with the (not by any means perfect) EU, we have some hope that their wings will be clipped.

So tomorrow I vote Remain with a heavy heart. I vote to legitimise one right wing bunch of arseholes in order to avoid an even worse outcome.

This entry was posted in Politics and tagged #Brexit, EU, Indyref. Bookmark the permalink.