Mapping the nodes for #rhizo15: my photo choice

Posted on 21st April 2015 by NomadWarMachine 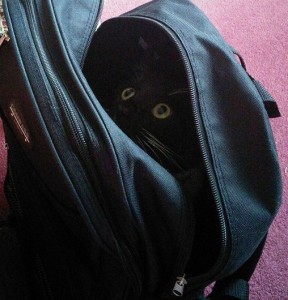 Jane had the neat idea of mapping we #rhizo15 participants onto a Google Map (still time to fill in the form with your info, if you’ve not already done so ). 🙂 One of the questions that she asked us was this:

What can be seen there? What can’t? (Just a few sentences please … blog the rest! 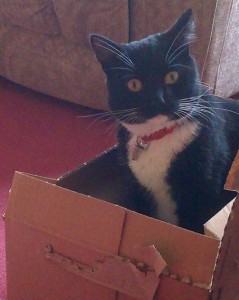 I replied saying that it would probably be a picture of my cat Lacey in a bag or a box. That’s not because I think my cat is the cutest cat in the world (she is, but that’s a different issue), it’s a decision that I made a few years ago when I was involved in the student occupation movement here in Glasgow. Many of my friends have been arrested for activism, some of them were attacked by other students (I can’t find the link I want, but that one gives a flavour of the attitude of some towards us), at the time it seemed sensible not to use pictures of our faces for our social media profiles, and that’s become a habit.

There’s also another reason for choosing Lacey as an example of who I am in #rhizo15. When we got here, along with her wee pal Cagney, they were poor, timid wee mites who hated being picked up that we fell in love with at a local rescue centre. Ten months later they are confident and affectionate and Lacey now shouts at me to get me to pick her up and stroke her. Much like the difference in me from the beginning of #rhizo14 to now – my online confidence has grown as I have learnt to trust this wonderful rhizomunity.

Finally, this is a response to Terry Elliot’s post and also Doug’s  Both of these posts made me think I should share a bit more of who I am.

5 Responses to Mapping the nodes for #rhizo15: my photo choice