Posted on 25th September 2015 by NomadWarMachine 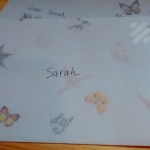 When I was a teenager I had two pen friends – one in Paris and one in Berlin. I wrote them painfully dull letters in excruciating French and German and received  equally dull letters back from them. My heart sank when I came home to find one of those letters awaiting me – foreign looking squiggly writing from a friend who was not really a friend. I wonder if modern, middle class teens have the same awkward experiences that I had, or if the internet has helped to improve such things.

Nowadays I am EXCITED when I come home and find mail in an unfamiliar hand. Which of my friends, I wonder, has written to me? I’ve had a lovely dish from Autumm, yummy peach preserves from Karen, a beautiful painting from Stephanie – I am rich, and I am thankful that I live in this digital age and have real friends all over the world. It’s not about the gifts, precious though these are to me, it’s about the friendships they represent. 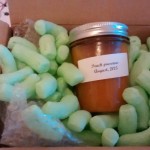 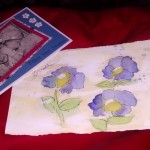 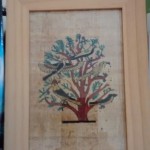 Karen also wrote me a long letter – and as I sat down to read it I remembered those earlier letters from abroad. There’s lots of us talking and writing about these new friendships at the moment – whatever these are, there is nothing virtual about them.

This picture was a gift from Maha to Niall – not through the post, but when we met her recently. I’ve already written about that 🙂